“Cloverfield” was massively hyped months before people knew what to call it. The story of producer JJ Abrams surprise trailer on the Fourth of July is now legendary, and yet another feather in Abrams cap of brilliant marketing. All fans of Alias and Lost know that Abrams hooks you in with provocative questions and mysteries, then annoys the hell out of people by not giving any answers. For “Cloverfield” there is no clock or hatch or conspiracies or smoke monsters. And the audience can be assured that the mysterious monster destroying New York is revealed- on the off moments when “Cloverfield”‘s shaky camera slows down enough to catch it.

This destructive night starts in the most banal of places, a goodbye party for New York resident Rob, who’s off to Japan. Rob’s brother Jason and his fiancee Libby put the party together, while his best friend Hud videotapes testimonial goodbyes on a camera. But Rob is shaken big time when his on again/off again girlfriend Beth shows up to the party with another man. Oh, and a monster then attacks New York and kills everything around them for good measure. It’s always something. Abrams did not direct “Cloverfield” despite being the only known name attached to it. However, director Matt Reeves was a producer and writer for Abrams first show Felicity, and screenwriter Drew Goddard is a writer for Lost. Abrams also came up with the idea himself, in an attempt to produce a “Godzilla” like film for American audiences. Although Abrams is just labeled as a producer for “Cloverfield” his fingerprints are everywhere.

Reeves’s home video camera shooting has already labeled “Cloverfield” as a monster film for the YouTube generation. The implication is that when the end comes, getting videos of it will be the preferred way to document it, as if it was just another clip for the Internet. But the shaky cam is more reminiscent of Paul Greengrass, who’s “Bourne” movies and “United 93” already felt like they were being shot with a camcorder. As a commentary on this kind of documentation, “Cloverfield” hints at that aspect of the story but doesn’t have much time to go deeper into it.

Abrams name, and the mystery aspect to the story, makes many people compare “Cloverfield” to Alias or Lost. But since those series have lasted for years, they can take more time to let the story breathe and not be so frantic- which has annoyed many fans over the years. In addition, Alias had Jennifer Garner’s star making turn, and Lost has gripping characters and brilliant acting from the likes of Terry O’Quinn, Michael Emerson, Matthew Fox and company. “Cloverfield” doesn’t have anyone at that high caliber among its no name cast, which is both a flaw and a deliberate calculation.

Since these characters are banal and just scream much of the time, Abrams, Reeves, and Goddard are likely trying to show that in the face of certain death, this is how regular people would really act, unlike many movie characters. This may be realistic, but it can also make an audience squirm in their seats while waiting for more monster attacks. And considering that Goddard wrote some of the best scripts for Season 3 of Lost, the screenplay’s flaws are a bit more disappointing.

Find how to watch Cloverfield trilogy on 123 Movies Helper site. 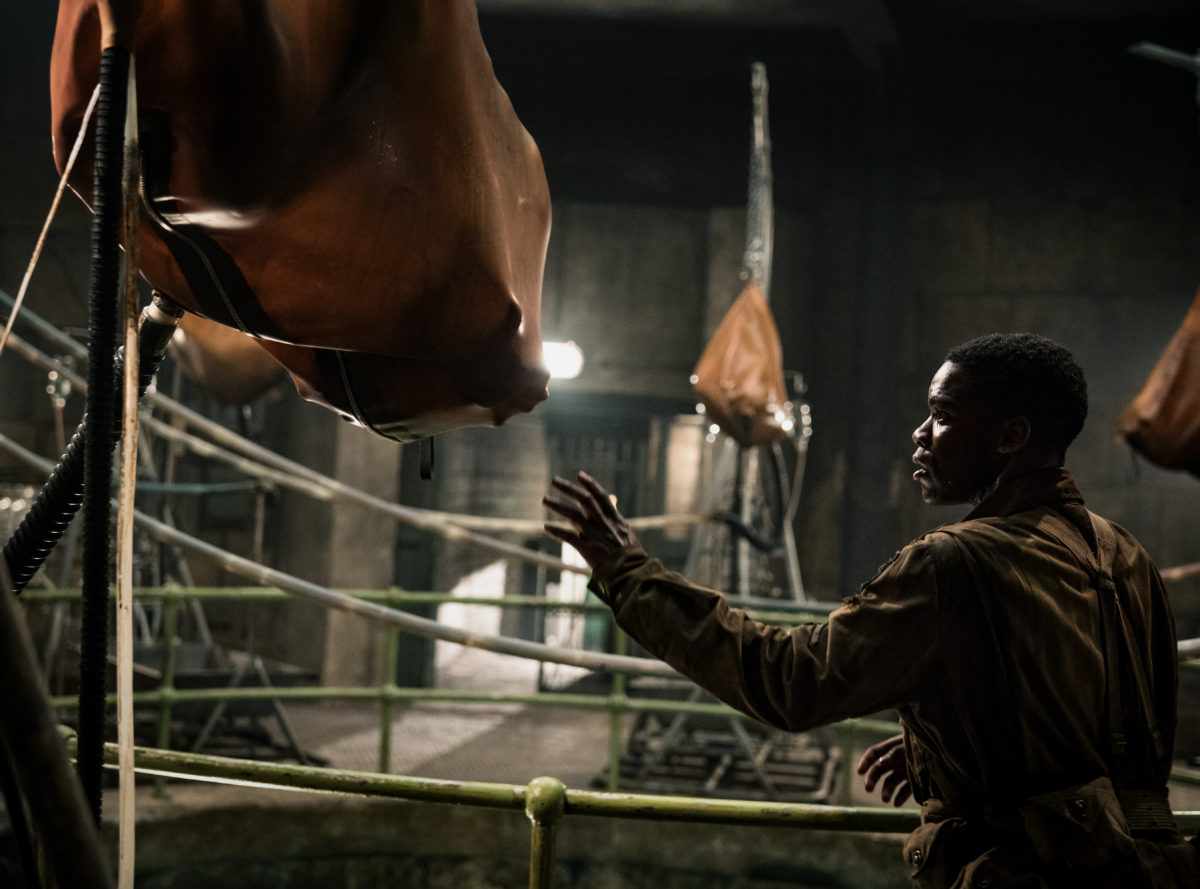 But audiences did not help “Cloverfield” set January box office records for the dialogue- they want monster attacks. Some of the biggest effects were given away in the famous trailers, so there are parts that “Cloverfield” fanatics have already seen for months. Still, Abrams and Reeves do quite a lot with half the budget that a Steven Spielberg or Roland Emmerich has to work with in disaster films. The shaky cam technique may be dizzying and distracting, but the action is always in your face.

Abrams and Reeves try to make the audience feel like they are actually there during the end of New York City. They succeed in spades, and almost too well. By the end of all these chases and attacks, the audience can feel stunned and blown away, and yet feel as worn out and exhausted as the characters. It is both a jaw dropping experience, and one you might not feel like experiencing again right away. Maybe that’s why “Cloverfield” has struggled at the box office since its record setting opening weekend.

Now about the monster itself. For much of “Cloverfield” all Abrams and Reeves show are glimpses of various body parts like the tail and several arms. When we can actually see the monster’s full form, its either only for one second, or unclear because of how much the camera is shaking. Yes, it is a lizard like creature that some might call a “Godzilla” ripoff. But Godzilla never had features like this one does. Yes, there are plenty of smaller creatures that spawn from the monster, which may bring about some unpleasant memories of the “Godzilla” American remake. But these smaller monsters are no “Jurassic Park” ripoffs, as they are vicious and quick buggers. Still, they are no match for their father- or mother, or whatever it is- and there are a few attacks you didn’t see in trailers that might make you scream out loud. At the least, it will make you jump backwards a few times. It becomes quite obvious that Abrams, Reeves, and Goddard brought some disturbing parts of their imagination to “Cloverfield.” 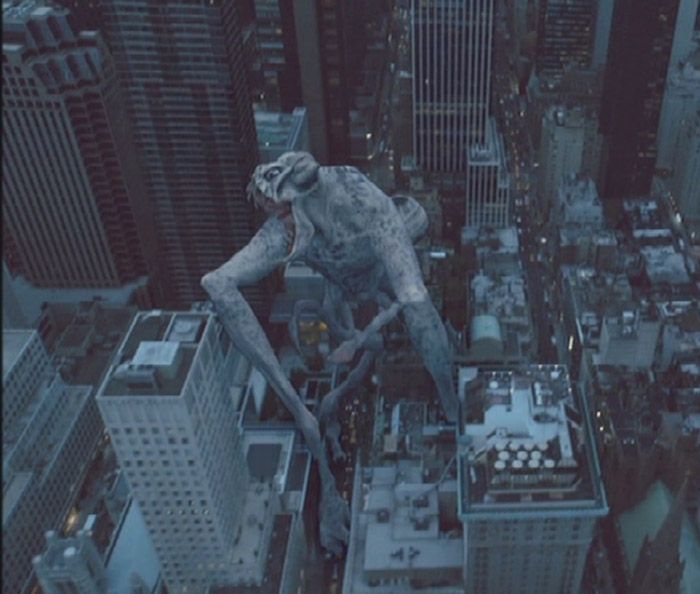 But perhaps the biggest obstacle of “Cloverfield” is that its revolutionary take on the monster/disaster movie isn’t all that unique anymore. Yes, the fact that it is from the point of view of a handheld camera is different. However, Greengrass has already mastered the shaky cam technique with a regular camera. “Cloverfield” is a movie that tries to put a disaster movie in terms that will make the audience remember 9/11, and there are a few blatant “homages.” But Greengrass’s “United 93” cut more to the bone, probably because it was actually set on 9/11. “Cloverfield” switches the typical disaster formula by putting the focus on a small group of people trying to survive, not on the fighters in the front lines. However, movies like “War of the Worlds” and “Signs” have already used that trick to frame their disaster stories, so “Cloverfield”‘s focus on ordinary characters isn’t all that new.

Still, Abrams and Reeves make “Cloverfield” into the kind of unique experience that the trailers promised. It is many things at many points, some good and some bad. It is frequently tedious, frequently hard to watch, and frequently derivative. But then it is also frequently intense, frequently jaw dropping, and frequently downright terrifying to a record breaking degree. I now have a good idea of what it would be like to live in this kind of crisis, as Abrams and Reeves try to do. But I’d rather not have to use this new knowledge in real life- I doubt my video camera could be as incredibly well preserved as “Cloverfield”‘s is.